Have had an interesting problem with the latest version of Google Chrome and a classic ASP site that I am responsible for.
The site uses session variables to control the authentication of logged in users. These are compared against a backend database to ensure that the logged in user is still authenticated while they move around the site.

I had a report from one of our external customers bemoaning the fact that we were not allowing Chrome to navigate the site, they could log in correctly and arrive on the landing page but as soon as they tried to move to any of the other authenticated pages they would be logged out.

I tried to replicate the problem on the internal test site but could not. Looking at it the differences between the two they were that the external site was secured (SSL Certificate) and being published through ISA 2006.

I created a new site (by copying the live site in IIS) and created a rule for access through the ISA server (purchasing certificate from Digicert - best certificate provider around).

AND IT WORKED. Wahoo, so the problem must be in the ISA Rule/IIS/Certificate (as these are the only things that are different).

I then spent the next day comparing the two sites (Live and Dev). Unfortunately I could find no differences at all. The rules in ISA are identical; the IIS settings are exactly the same. I rekeyed the SSL certificate so it was created from the same IIS configuration but I could not get the original site to work.

I started to look at the live site in more detail, the return code from the logout is a querystring that showed that the error was that the username or password was incorrect. I didn’t have a reason to put the site into maintenance and block customers out of the system as it was “only” Chrome users who were affected, therefore the debugging had to be done live. To do so I added a couple of lines to the ASP to show the variables:

This showed that all was correct and the logouts were only happening after the next click within the site. I then had to put some error trapping into the head of the page so on the next click I could see what variables we had:

Strangely the output on this had:
IPAddress
Once I started to look at the output I saw the following: 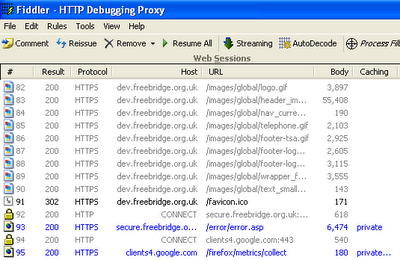 This showed that there was a 302 response when trying to get to favicon.ico (line 91)……. Hummm, I don’t have a favicon so why was it redirecting?
AND HANG ON, what’s that on line 93? Why is the Secure URL turning up when I’m browsing the Dev site…… Suddenly a light bulb went off in my head. Scroll back to how I created the Dev site (hint ….. the IIS settings are exactly the same……).
The Dev site was a copy of the secure files, that includes the Web.config. Web.config contains the error page redirections:

So what was happening then?
So, what the hell does this all mean?
For some reason the latest version of Chrome insists on trying to download favicon.ico, as this doesn’t exist a 404 is generated on the server and *if* you have some code to trap 404’s then it will execute.

The lesson:
When copying websites carefully look at your web.config and put a favicon.ico on the root of your websites so that Chrome doesn’t put a whole load of 404’s into your weblogs (or worse stops the customers from using your site).
Posted by Tobie Fysh on Thursday, December 23, 2010