Getting a Topology when Topology Builder is not available

Quick and dirty post about how I got around an issue with an environment today.

Environment is Lync 2010 with multiple Enterprise Edition pools. A single Skype for Business 2015 server exists in the environment as a proof of concept server which means that the Lync 2010 topology builder can't deal with to download the topology any more. Unfortunately the SfB server was inaccessible and I've not been given rights to be able to help fix that, as such I needed to get the topology out of the environment using the Lync 2010 servers (note, I also didn't have any machines that I could install the SfB tools onto either). 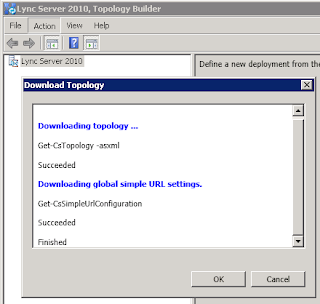 And I get the option to choose a filename for the download, but then the tool crashes: 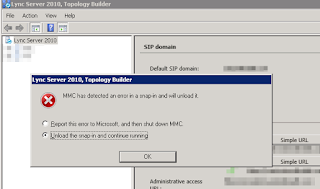 And no file exists on disk.

Hum.... So looking at the 2010 progress report I have the commands that I need now:

I've added pipe clip to throw the result onto the clipboard which I can then paste into notepad.

On my scratch Virtual Machine I load the 2015 Topology Builder and load the notepad file, and:

I've got an error as my XML only has the topology, I don't really care about the contents of Get-CsSimpleUrlConfiguration so that's the issue here (I suppose I could output them and stitch it together in the text file but anyway), boom: 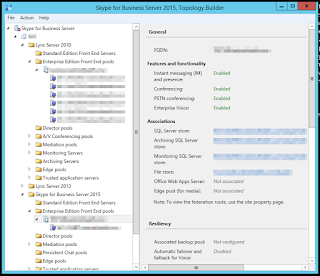 And why did I spin up my scratch VM.... Well, my full fat machine has SfB 2019 tools installed which does not allow 2010 environments to be loaded: 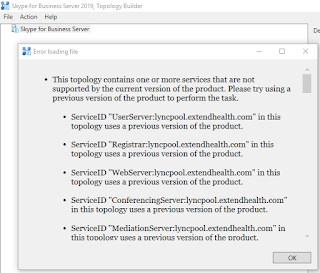